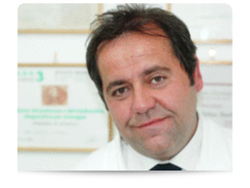 KEYWORDS
Finger reconstruction; Congenital hypoplasia; Prosthesis; Osseous implant
Abstract
The majority of the patients, who underwent amputation of one or more fingers or present congenital absence of some phalanxes, can be treated by microsurgical reconstruction. Several reconstructive techniques are available, but in some cases the use of osseous-integrated implants to anchor silicon digital prosthesis is a valid alternative. We present one case, a 27 years old male, affected by congenital hypoplasia of the second finger of the right hand who underwent reconstruction by prosthesis and extraoral bone-anchored implant.
Introduction
Nowadays the amputation of one or more fingers of the hand as the consequence of a trauma or congenital absence of one or more phalanxes, carries a serious reduction of hand function and a social dysfunction for the patient. Several microsurgical techniques offer concrete opportunities to reconstruct the lost or absent phalanxes: digital transposition of the foot second ray and the use of osteo-cutaneous flap. The use of bone-anchored implants [1] and the consequent anchoring of silicone prosthesis represent an alternative technique. Implant technique and concepts of osseous integration [2] are known elements, used since 25 years in dentaloral surgery to correct congenital or acquired deformities of the crano-facial district. The Branemark technique consists in the positioning of titanium implants of a defined shape, called fixtures, titanium oxide coated, 3050A thick able to form a peculiar chemical bond with the surrounding tissues obtaining a complete integration between the implant and the bone; furthermore these implants have a screw shape which gives them the needed mechanical stability and a sufficient torsion resistance [2,3].
Once the process of osseous integration is completed, the link between implant and trabecular bone tissue is so strong to impede the detachment and extraction of the implant, even undergoing forces of variable dimension and amplitude. The validity of this technique is confirmed by the large use of these fixtures in plastic surgery to support implants, epithesis etc. We present one case, a 27 years old male affected by congenital hypoplasia of the second finger, who underwent reconstruction by epithesis and bone-anchored implant.
Case report
A twenty-seven years old man, caucasian, was affected by congenital hypoplasia of the second finger of the right hand: arrested growth at the level of the proximal phalanx, normal development of the second joint, metacarpal-phalangeal and syndactilia between the second, third and fourth finger. He underwent, in paediatric age, surgical correction of the syndactilia not in our department. Consequently, even being right handed, he was educated to the use of the left hand.
He came to our attention for cosmetic reconstruction of the second finger, being the functional problem solved opposition of first and third finger of the right hand and acquired left handing (Fig. 1).
Radiologic tests were performed in lateral and palmar projections to evaluate the skeleton's consistency before inserting fixtures, the parameters to establish the needed type, specifically thickness and dimensions. The patient has undergone finger reconstruction by bone-anchored implantology, standard modality in two stages. During the first procedure on regional anesthesia (40 min), after sculpting a small skin flap, exposing and exploring the implant site, we have positioned a 13 mm. fixture in the bone inside the medullary canal; a bone implant was not needed and we repositioned the skin flap to cover the fixture. Six months later we planned a radiographic control to evaluate the degree of osseous integration of the fixture and consequently a second surgery was performed in local anesthesia (15 min) during which we have positioned an abutment of transcutaneous connection.
After one month, once completed surgical healing (Fig. 2), we took a silicon print in which we included a laboratory analogue where, after this development, an anaplastologist technician has created a digital prosthesis in semi-flexed position (Fig. 3).
At first the patient presented holding of the prosthesis and rotation on its axe's problems; they were solved through a specifically created bracket anchoring.
After 6 months, we performed clinical and radiographic control: radiological exams in lateral and palmar projection (Fig. 4).
This follow-up showed an optimal degree of osseous integration of the implant and the absence of infection and another complications.
The patients refer, after the initial adapting period, lack of limitation concerning the prothesis and a good integration in his body scheme. He did not have work-related problems and only occasionally referred unwanted detachment of the prosthesis in the first months due to excessive handshaking or holding very heavy weights. 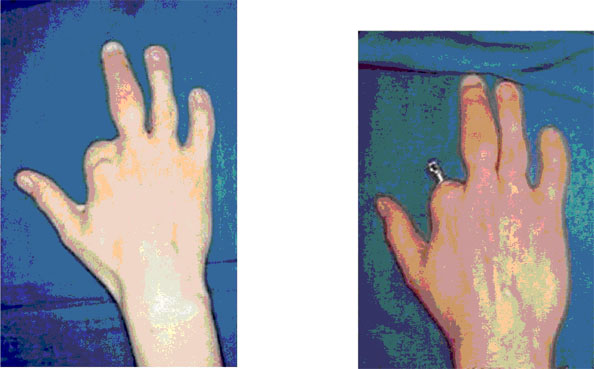 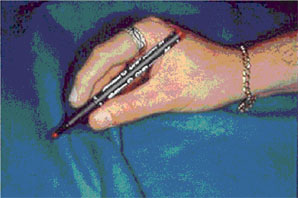 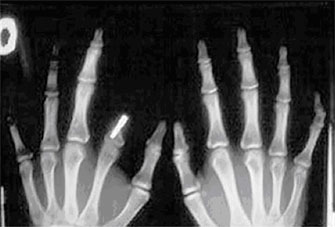 Figure4X-raysixmonthspostoperatively.
He is very happy of the cosmetic results of his hand and he declared achieved the desired target.
Discussion Finger reconstruction, especially of proximal phalanx, requires complex surgical procedures with specific functional and cosmetic requirements. Digital transposition of the second ray is, between all the surgical techniques, able to achieve the best functional recovery of the missing finger in spite of doubtful cosmetic results; usually a different shape and shorter length of the transposed finger result in an unpleasant result which force the patient to hide his hands in his pockets not to show the deformity. Furthermore, even if this technique may offer several advantages whenever fingers are amputated or mutilated, it is very limited in amputation of the proximal phalanxes of the second and third finger because the transposed digital finger may reveal itself too short and consequently not functional at all. Our patient did not have any functional limitation: being a congenital pathology, during development and acknowledging, he used compensation mechanisms to reach a high level of functioning of his hand. Once rejected the possibility of autologous tissues reconstructive techniques, we were oriented toward the least invasive technique which could solve the aesthetic need of the patient: osseous integrated implant is, without any doubt, a valid alternative to reconstruct the missing finger.
Bone anchoring is a method used since 25 years in oral surgery; it was first described by Branemark [2,3] as an alternative technique to dental prosthesis. For many years it was the therapy of choice for teethless patients until Lundborg [4], in 1993, started the use of osseous-integrated implants to anchor prosthesis of the long bones of the leg. Later this technique was used to correct post-trauma and post-malformation pathologies of the crano-facial area [3], to support prosthesis, epithesis and other devices to improve trans-osseous transmission of hearing in the temporal bone
[3] or to reconstruct missing or lost fingers after traumas on in congenital malformations [5,6].
At the beginning the use of this technique was limited to few very selected cases. Prosthesis-anchored to osseous integrated implants allow a partial recovery of the tactile function because of the direct pressure of the implant on the bone: the patient is able to perform the majority of the daily manual activities: writing on the computer, paying piano or grab big, heavy objects.
It is a very easy technique compared to others, performed under local or regional anesthesia, in relatively short time. Anchoring of the implants is technically easy and the risk of infection and implants, complications is minimal by optimal hygiene of the wounds.
The limits to this procedure are: preservation and normal functioning of the metacarpal phalanx joint and the presence of an adequate consistency of the bone to allow implant's anchoring.
Major complications are: lack of osseous integration of the implant, but is very rare, detachment of the prosthesis or lack of acceptance by the patient.
References
[1] Bruneel N, Helsen JA. In vitro simulation of biocompatibility of TiAlV. J Biomed Mater Res 1988;22(3):20314.
[2] Eriksson E, Branemark PI. Osseointegration from the perspective of the plastic surgeon. Plast Reconstr Surg 1994;93(3):62637.
[3] Tjellstrom A, Rosenhall U, Lindstrom J, Hallen O, Albrektsson T, Branemark PI. Five-year experience with skin-penetrating bone-anchored implants in the temporal bone. Acta Otolaryngol 1983;95(56):56875.
[4] Lundborg G, Branemark PI, Rosen B. Osseointegrated thumb prostheses: a concept for fixation of digit prosthetic devices. J Hand Surg [Am] 1996;21(2):21621.
[5] Pilley MJ, Quinton DN. Digital prostheses for single finger amputations. J Hand Surg [Br] 1999;24(5):53941.
[6] Manurangsee P, Isariyawut C, Chatuthong V, Mekraksawanit S. Osseointegrated finger prosthesis: an alternative method for finger reconstruction. J Hand Surg [Am] 2000;25(1):8692. 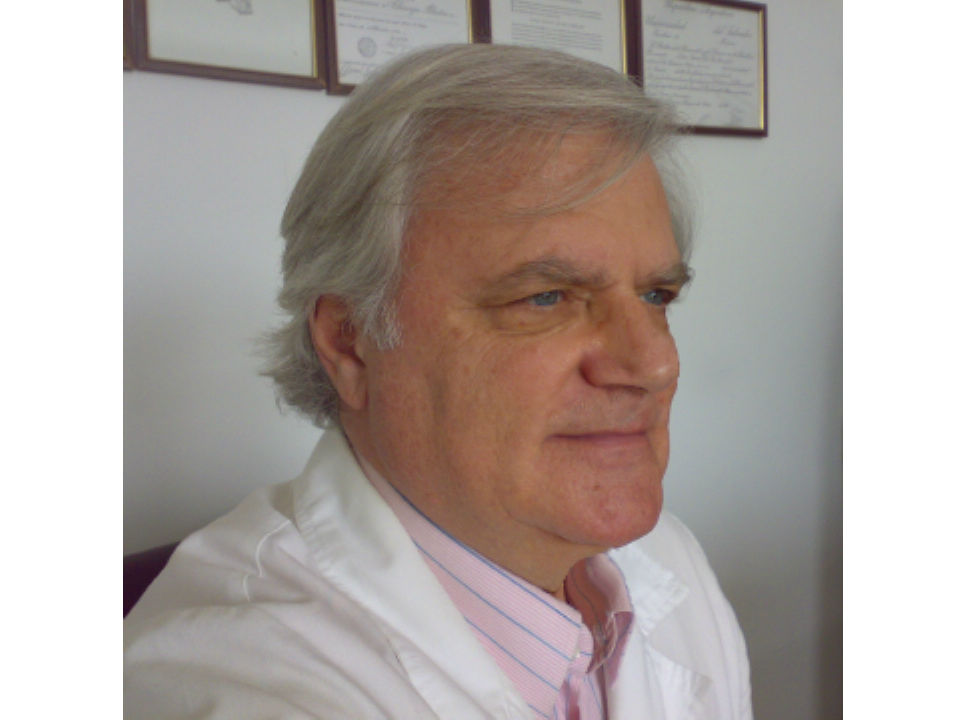 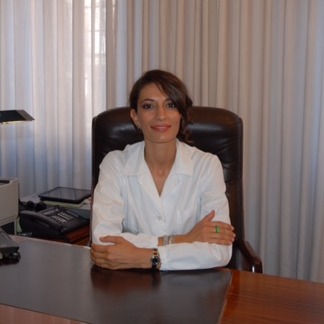 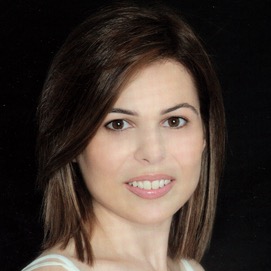 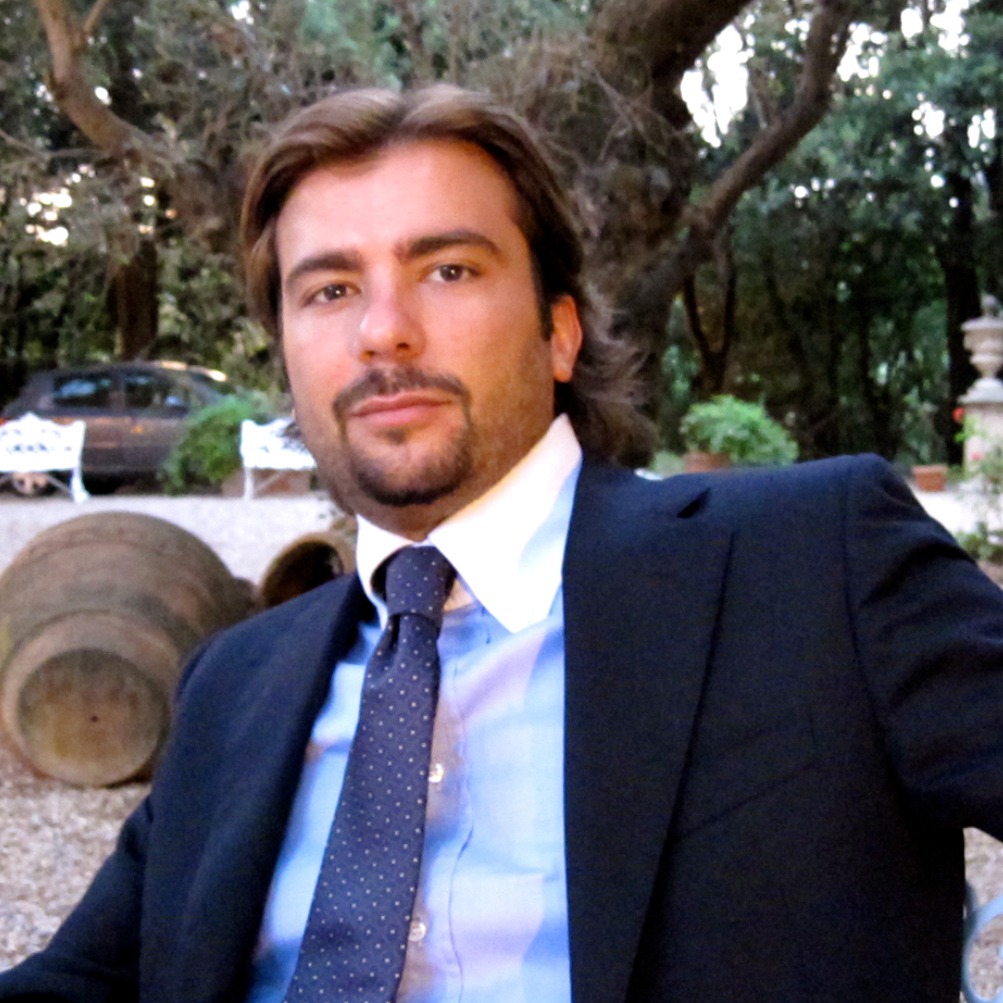 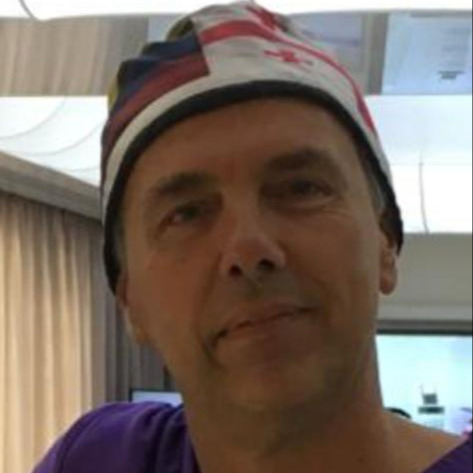 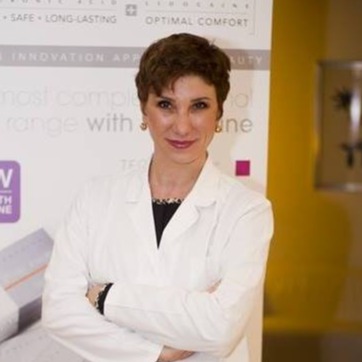